Textiles are good for us; they protect from harsh weather conditions, safeguard food, provide comfort and shelter, and ensure personal safety.

Humans connect with textiles as agents of spiritual wellbeing and as a conduit to ancestral knowledge. The activity of making them by hand encourages opportunities for social exchange. 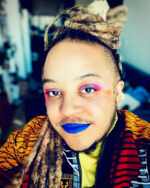 Syrus Marcus Ware is an Assistant Professor at the School of the Arts, McMaster University. He is a Vanier scholar, visual artist, activist, curator and educator. Syrus uses drawing, installation and performance to explore social justice frameworks and black activist culture, and he’s shown widely in galleries and festivals across Canada. He is a core-team member of Black Lives Matter – Toronto, a part of the Performance Disability Art Collective, and an ABD PhD candidate at York University in the Faculty of Environmental Studies. His on-going curatorial work includes That’s So Gay (Gladstone Hotel, 2016-2019) and BlacknessYes!/Blockorama. He is the co-editor or the best-selling Until We Are Free: Reflections on Black Lives Matter in Canada (URP, 2020).

Jenna Reid (she/her) is the current Artistic Director at Kickstart Disability Arts & Culture. Jenna is a fibre artist who works primarily with the practices of quilting and natural dyes as a way to engage with activist based aesthetics. Throughout the spring, summer, and fall of 2020, Jenna has worked alongside prominent social movements in Toronto creating large scale banners and pennants to creatively activate messages for racial justice and radical change. Jenna has completed a residency on Toronto Island with the Feminist Art Conference, and has exhibited her work and presented on panels in Canada, the US, the UK, and Australia. Jenna’s studio work explores inter-institutional violence informed by the histories of queer, feminist, Deaf, disability, and mad movement organizing. With a studio-based PhD in Critical Disability Studies at York University, Jenna’s teaching and research specializes in the emergent field of Mad Studies. Jenna has published in The Journal of Literary and Cultural Disability Studies, Canadian Art, Intersectionalities: A Global Journal of Social Work Analysis, Research, Policy, and Practice, Journal of Progressive Human Services, and Studies in Social Justice.

Sewing the Seeds of Change: Banner Workshops for Revolutionary Times

Banners are textiles that are usually seen front and centre at direct action events. What is less visible are the ethics of care that go into making banners. Through conversation while making a banner together, Syrus Marcus Ware and Jenna Reid will talk about what they have learned through making banners, and how the values of disability justice and healing justice are woven into the work at every step of the process. In this hands-on workshop participants will learn a few techniques for how to make their own banners and will come away with an understanding of how textiles fit into our revolutionary efforts.

Join Guest Programmer Jenna Reid as she goes on a virtual tour of artist Holly Chang’s studio. Holly Chang is a Toronto based artist working within the mediums of photography, natural dyeing, textiles and quilting. She is currently completing her MA in Communication and Culture at *X University/York University. Chang, as a second-generation Chinese Canadian, maintains cultural ties with her cross-cultural identity and draws on her hybrid background for inspiration. Her textiles engage her natural dyeing practice, which utilizes plants and roots which are often foraged. Combining her textile and quilting practice with photography, Chang aims to explore limitations of each medium and how their amalgamation can create new meanings. 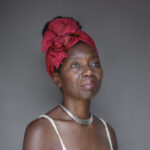 Awakening presents a conversation that takes place in the future on a spaceship. Two African Diasporic travelers encounter Gloria Smith, a Black woman from present day Canada who is an activist on a mission to travel back in time to stop transatlantic slavery. Gloria has ruptured the security of the space ship and has bypassed the rules of space/time to ask for their help in carrying out her plans. Awakening was shown at and commissioned by Art Gallery of Alberta as part of Nests for the End of the World in Edmonton, 2020; and screened during Nuit Blanche in Toronto, 2020.

Camille Turner is an explorer of race, space, home and belonging. Born in Jamaica and currently based in Toronto, her work combines Afrofuturism and historical research. Most recently, she has been unsilencing the entanglement of what is now Canada in transatlantic slavery. Her interventions, installations and public engagements have been presented throughout Canada and internationally. Camille graduated from Ontario College of Art and Design and York University’s Masters in Environmental Studies program where she is currently a PhD candidate.

Experiences of mental health are typically understood as individual in nature; we’re taught that it’s ‘all in the brain,’ part of a person’s chemical make-up, and/or related to traumatic life events. In this new work, created for Social Being programming at the Textile Museum of Canada, Thirza Cuthand and her mother Ruth Cuthand talk about Thirza’s last manic episode and the experiences they both had with getting her into the hospital. The intimate conversation is held over a backdrop of Ruth’s beaded brain scans of brains afflicted by mental illness. Through this work we are invited into new understandings of the relationships and social elements – between child and mom; person(s) and mental health professionals; family and institutions – that take shape around experiences of mental health and well-being.

Ruth Cuthand is a Canadian mixed media artist of Plains Cree and Scottish ancestry whose practice includes painting, drawing, photography, and beadwork. Through her anti-aesthetic stance, her work challenges mainstream perspectives of colonialism and the relationships between settlers and Indigenous people in a practice marked by a delicate balance of political invective and humour. Ruth is widely considered an influential feminist artist of the Canadian prairies and is lauded for her unflinching interpretation of racism and colonialism. Ruth’s work is featured in many collections, including the National Gallery of Canada, the Art Gallery of Ontario, and the MacKenzie Art Gallery. In 2020, she was a recipient of the Governor General’s Awards in Visual and Media Arts. In 2013, she was recognized with a Lieutenant Governor’s Arts Award. Ruth lives and works in Saskatoon, Saskatchewan.

Thirza Jean Cuthand was born in Regina, Saskatchewan, Canada in 1978, and grew up in Saskatoon. Since 1995 she has been making short experimental narrative videos and films about sexuality, madness, Queer identity and love, and Indigeneity, which have screened in festivals internationally. Her work has also been exhibited at galleries including the Remai in Saskatoon, The National Gallery in Ottawa, and The Walker Art Center in Minneapolis.  They completed their Bachelor of Fine Arts majoring in Film and Video at Emily Carr University of Art and Design in 2005, and her Masters of Arts in Media Production at X University in 2015. She is a Whitney Biennial 2019 artist. She is a non-binary Butch boy who uses She/They pronouns. They are of Plains Cree and Scots descent, a member of Little Pine First Nation, and currently resides in Toronto, Canada.