Kind Words Can Never Die presents an extraordinary collection of Victorian needlework mottos stitched by anonymous women and girls in the mid- to late-19th century. Mass produced by American wholesale companies, standardized sheets of perforated cardboard were printed with messages such as biblical quotes, song titles and popular maxims of the time that reflected the cultural and religious milieu of the North American Evangelical Protestant middle-class: Do Right and Fear Not; What is Home Without a Mother?; Kind Words Can Never Die. Women ordered the mottos from mail-order catalogues, stitched them using a simple satin stitch and hung them in the home in specially designed motto frames.

With the rise of industrial manufacturing, men worked outside the home in growing numbers, setting established home and family structures into flux. Women increasingly took control of domestic space as consumers and moral influencers. Their decisions of which mottos to stitch and hang on the walls declared which of society’s ethical, cultural and religious edicts would guide the aesthetic and moral tone of the home. As objects of material culture, the mottos attest to the work women did to cultivate carefully chosen personal and social values in their families.

This particular collection of mottos was built by Jane Webster (1919 – 2009) from the mid- to late-20th century at her home in the Caribou Harbour area of Pictou, Nova Scotia. Family photos of the interior of the home taken in the 1940s show a few mottos on the wall ­— just enough to spark a collector’s passion in Jane who had recently started spending time at the house. Jane purchased the mottos from farm auctions and received them as gifts, eventually amassing 173 examples that represent the vast majority of available motto texts. In Jane’s possession, the mottos were relieved of their purpose as edifying agents and re-contextualized as curious objects displayed in the spirit of generosity, welcoming and wit.

The Textile Museum of Canada would like to thank Jane Webster’s family for their support and for the generous loan of Jane’s collection that makes this exhibition possible. 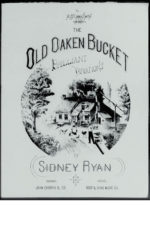 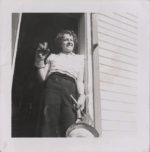 Kind Words Can Never Die is a companion exhibition to Katherine Knight: Portraits and Collections, curated by Sarah Quinton.