Jane Kidd’s hand-woven tapestries are masterful technical and conceptual explorations. Interlacing threads by hand, without the assistance of mechanization, is time-consuming and ponderous, yet the directness and the freedom afforded by working this way allow Kidd to imbue the woven imagery with her energy and vitality. Her tapestries buzz with curiosity and urgency as she creates images that reference environmental manipulations: genetic modification of seeds, deforestation, hybridization. The exhibition invites reflection on real and imagined human engineering of the natural order.

“I’m constantly looking back at the history of textiles for links that will connect my work to that history.” -Jane Kidd

Curious brings Jane Kidd’s work into conversation with the Textile Museum of Canada’s global collection of tapestry. The artist has selected objects from the Museum’s collection that artfully illustrate individual and cultural ingenuity in the techniques of tapestry weaving. Selections include Coptic fragments made in Egypt from 200-800 AD, examples of Peruvian tapestry dating from 700-1550 AD, 19th century Chinese silk slit tapestry, and a stunning Mexican sarape which was brought into the collection in 2017 and will be displayed here for the first time. The artist’s voice will feature prominently in the exhibition, reflecting on the ways in which her contemporary practice connects to the style, technology and innovation found in the ancient art of tapestry.

Jane Kidd is based in Salt Spring Island, B.C. She advocates for the centrality of tapestry weaving: a process that contributes to the sharing and preservation of personal expression and cultural practices.

Kidd taught at the Alberta College of Art + Design in Calgary for over 30 years. Highly recognized as one of the most dynamic textile artists in Canada, Kidd has received numerous prestigious awards. She was elected to the Royal Canadian Academy of Art in 2001, and in 2008 she won the Alberta Craft Council Award of Excellence. In 2016, she received the Governor General’s Award in Visual and Media Arts Saidye Bronfman Award for her contribution to fine craft. She has exhibited in numerous exhibitions across Canada, the United States, Japan, Poland, Hungary and Australia. Her work is held in private and public collections including the Canada Council Art Bank, the Department of Foreign Affairs, the Alberta Art Foundation, and The Canadian Museum of History. 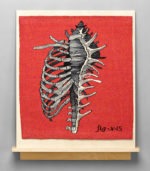 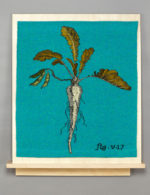