Skip to content
HomeAccueilWhat’s OnTo See & Be Seen: T-Shirts from The Canadian Lesbian and Gay Archives

To See & Be Seen: T-Shirts from The Canadian Lesbian and Gay Archives

Presented on the occasion of WorldPride 2014 Toronto, To See & Be Seen features T-shirts from the Canadian Lesbian and Gay Archives representing over four decades of the fight for visibility and recognition of lesbian, gay, bisexual, trans and queer (LGBTQ) communities. From organizations such as ACT UP, Queer Nation and local LGBTQ Pride events in Toronto and beyond, together they demonstrate a range of messages from expressions of identity, political and social struggles, to the celebration of community, love and pride. 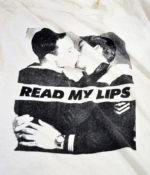 Marginalized communities have long used fashion as an accessible and public means to communicate personal identity and political views. In LGBTQ communities, T-shirt design has embodied these messages in ways that are veiled, humorous and defiant, evolving in tandem with wider popular and political cultures. Early T-shirt graphics often carried coded messages that were recognized by relatively few people – signs of solidarity within lesbian and gay communities. In the 1970s, as Gay Pride events in North America created spaces for LGBTQ people to assemble and demand equal rights, T-shirts began to display activist messages of pride and visibility.

Fueled by the AIDS crisis that started in the 1980s, LGBTQ organizations used the T-shirt as a medium to assert political and critical positions in a mainstream culture of denial and refusal. Integrating influences from visual art, popular culture and identity politics from around the world, T-shirts marked the bodies of people during protests and marches, affirming an individual and collective presence that would generate awareness and support increased equality. Over the last 20 years, messages of celebration have become gradually more prevalent, resonating with the gains and freedoms achieved in the continued fight for the right to exist, to love and to be.

To See & Be Seen is produced in collaboration with the Canadian Lesbian and Gay Archives & the Ryerson University Library and Archives and is supported by the Textile Museum of Canada and the School of Fashion, Ryerson University.