From Ashgabat to Istanbul: Oriental Rugs from Canadian Collections

From Ashgabat to Istanbul features seventy-five rugs from East, Central and West Asia from the collections of the Textile Museum of Canada, the Art Gallery of Ontario, the Nickle Galleries in Calgary and twenty-seven private collectors from Alberta, British Columbia, Ontario and Quebec. Reflecting the combined efforts of these public institutions and a large group of rug enthusiasts from different generations and of diverse backgrounds, the exhibition demonstrates the great range of Oriental weaving culture represented by court, urban, village and tribal rugs. At the same time it traces Canadian social history as reflected in rug collecting practices in Canada in the late twentieth and early twenty-first centuries, incorporating interviews with rug collectors, dealers, curators and business owners who share their insights into rug collecting. 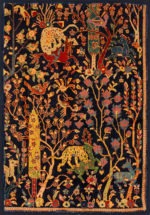 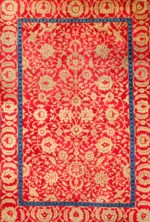 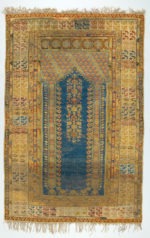 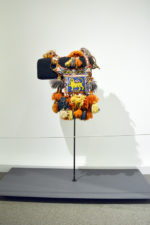 This project is funded by the Government of Canada

TMC 40th ANNIVERSARY SERIES
In conjunction with the exhibition From Ashgabat to Istanbul and the launch of the TMC’s 40th anniversary, we are pleased to host Oriental rug specialist Daniel Walker, the former Director of the Textile Museum in Washington and current Chair and Curator of Asian Art and Textiles at the Art Institute of Chicago.

Exclusive Cocktail Reception and Dinner with Special Guest and After Dinner Speaker Daniel Walker
Rare Beauty: Thoughts on Oriental Rugs
Wednesday October 8 at 6:30 pm
Tickets $250 per person. To reserve: 416-599-5321 x2246 or development@textilemuseum.ca. Charitable tax receipts will be issued for the maximum allowable amount.

Curator’s Tour
Wednesday December 3 at 6:30 pm
Join TMC curator Natalia Nekrassova for an introduction to the significant rugs and weaving cultures featured in this exhibition, with insights into how Canadian social history is reflected in rug collecting practices in the 20th and 21st centuries.

Haft Paykar: A Tapestry of Tales from a Twelfth Century Persian Romance
Wednesday December 17 at 6:30 pm
Considered a masterpiece of storytelling, the Haft Paykar is an epic romantic poem that tells the story of Bahram Gur, a king of ancient Persia who marries seven princesses, building for them a palace of seven pavilions. Join storyteller Ariel Belavi, whose repertoire derives from the literary traditions of Iran, Turkey and Central Asia, who will recount the tales Bahram heard in his journey to visit each princess.

Ali Riza Tuna: The Art of the Anatolian Kilim
Tuesday February 17 at 6:30 pm
Join us for a rare opportunity to meet Ali R?za Tuna, independent researcher, collector and rug specialist, for a talk on the aesthetics of the traditional Anatolian kilim in relation to Western art and artists – Impressionism and Abstraction, Picasso and Matisse. This lecture is organized in partnership with the American Conference of Oriental Rugs (ACOR).

Adventurers, Connoisseurs and Dealers: The Rise of Toronto’s Oriental Rug Traders
Wednesday March 11 at 6:30 pm
Join Neil Brochu, Co-ordinator of Collections and Conservation for the City of Toronto, as he traces the Oriental rug trade in Toronto and profiles the personalities and businesses that defined this unique history, shaping the city’s cultural landscape.

Talking Points: Collections, Collecting and Collectors
Wednesday April 8 at 6:30 pm
Join us for a gallery walkthrough and reception with curator Natalia Nekrassova and the collectors who have contributed rugs to the exhibition. Discover the motivations that inspire rug collectors and their contributions to enhancing the public appreciation of the cultures associated with these objects.